What is Hank saying these days….

“That’s my sister.  Gracie is my sister!”  – He didn’t want another little girl to touch Grace because Grace is his sister!

“Mama, I like that.  Thanks Mama!”  – Anytime he really likes something I did for him.

“Good Lord!”, “Gosh Dangit”  – Sayings he has picked up from his Mama!

Filed under The Tot

I wonder what it would take for me to update this on a more regular basis?  I love the idea of updating this on a regular basis but my follow-through is lacking!

Grace is getting quite the attitude for such a little person!  She gets very frustrated if you take her away from something.  She flings her little back back and pretends to cry!  She LOVES people and loves to flirt!  She HATES loud sudden noises such as the waiters at a restaurant singing the birthday song, crowds cheering to football games, etc…  She breaks out into the saddest cry you have ever seen!  She can get around very well and will probably be walking soon!  She always has a smile on her face!  And she especially LOVES to swing.  She just smiles and laughs the entire time she is in a swing.

Hank is growing up himself!  We moved him into a big boy bed this weekend and he absolutely loves it.  He loves to get into bed at anytime of day and play or read.  He looks so tiny in it at night when he is sleeping.  He LOVES music and LOVES to sing.  Lately he has loved playing with puzzles and he still loves books.  He still loves trucks and tractors and excavators and you name it!   He is going to do very well on the truck portion of the SATs….

Funny things he has said in the past month or so…

Dada, the deer got a boboo!  (After seeing a picture of the deer that Tater shot)

You want to play us?

That Tastes!  (He says this when he tastes anything that is really good!)

He is turning 2 in 2weeks!  I can’t believe it….however, I definitely can tell he is getting into his 2’s.  He pushes the limit on everything to see what he can get away with.  Also, this past month he has started putting a lot of words together and saying sentences.  It is awesome.  I love to hear him talk and see what is going to come out of his mouth next.  For instance, a few weeks ago he started telling me that Grace was too little to do anything.  I would ask him if Grace could play with his toys.  He would reply, “she’s too little”.  I would ask if Grace could sit on my lap.  He would reply, “no, she’s too little”.

In the past month, Hank has really started to interact with Grace.  He brings her toys, gives her hugs and kisses, puts her paci in her mouth for her, makes her laugh.  6 months has really been a turning point after Grace was born.  This past month has been so much fun.

Grace is doing amazing.  She has 5 teeth!  In the past couple of weeks, she has really started “talking”.  She just talks and talks and sometimes she sounds very angry!  However, if I look at her, she just shoots back with her great smile.  She sits very well and officially started crawling this week.  It’s an army crawl but she can get to where she wants to be.  She is always smiling.  I absolutely love when she grabs the side of my face and pulls me in for a very slobbery kiss.

Gracie loves “solid” food!  She really can’t get enough.  She eats 3 times a day and thinks bottles are for babies.  She drinks her bottles great in the morning and by the end of the day, she doesn’t want anything to do with it.  I have to figure out ways to get her all the formula she needs!!

Grace’s hair is long enough to put one pony tail on the top of her head.

Hank is still her hero….however, her aunt Jackie came to visit a couple of weekends ago and I think Grace found her new best friend.  She couldn’t get enough of Jackie!!

Following in her brother’s footsteps, Grace got her first tooth before she turned 5 months old!  We noticed it broke through this weekend.  She is 4.5 months old!

Grace: “You sure you know what you are doing, Hank?”

Hank: “Yah, I’ve seen Dada do this a hundred times!  Let me come over and help you with your seatbelt!” 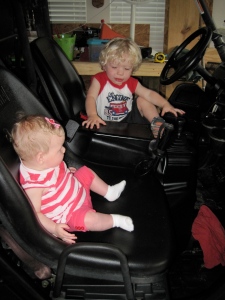 Grace: “Seriously, you can’t even see over the steering wheel!” 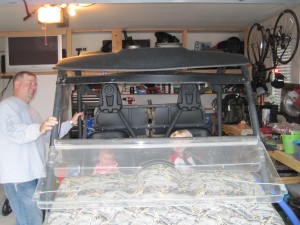 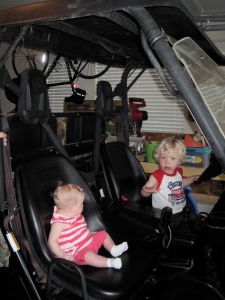 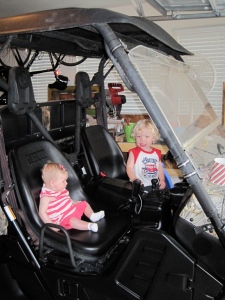 Have I ever told you the story about running out of gas in a busy intersection and how said story should have scared me into making sure my gas tank was always filled?  No, you say?

I constantly let my tank get really low because I hate to fill up my car with gas…. It’s just another thing to do and I hate to take the time to do it,  so I am always scrambling at the last minute to get gas.

Anyways, I was about 3 months pregnant and was just leaving a dentist appointment on my way back to work.  I got to a busy intersection in NW Houston and had to stop at the red light.  I was the first car in the middle lane!  I was probably singing along to some song when all of sudden my car powered down.  I remember thinking, “what the hell, did my battery die??” .  Then it hit me, my gas reminder thing had gone off the night before and I had made a mental note to get gas first thing in the morning.  Note to self, mental notes are broken!

I have to thank God for two things.  First, Hank was at daycare and not in the car with me and second, there was a gas station on the corner.

My first thought was to push it somewhere but I really didn’t know how or where I was going to push it….so I did the next best thing, I left my car and tried to push out my stomach  (for sympathy points!) and darted across the intersection to the gas station.  Cars all around were slamming down on their horns….it is up there as one of the most embarrasing times in my life.  I went in tried to get a gas can and fill it up quickly….but you know how that all goes.  And of course, gas tanks are simple these days.  I took off the top hose thing and threw the hose attachments on the ground.  I filled up the gas can and ran back to my car.  However, when I got back to my car I couldn’t get the damn hose in the tank.  That’s when I realized that I needed all the attachments I threw on the ground.

So, I set the can down, ran back to the gas station, got the attachments and ran back to my car.  Remember, I am at a busy intersection!!!  Cars were piling up and having to merge into the other lane.  Horns were going off the whole time.  I finally got a gallon of gas into my car and was able to start it and pull into the gas station.

After this incident, I vowed to never let my tank get low again.  However, a few nights ago at a stop light with both kids in the car and my husband in his truck behind us, I almost had the same scenario play out at a bigger intersection.  Grace was crying in the backseat, so I had put the car in park while sitting at the red light to fish out her pacifier.  I got her pacifier back in her mouth and as I turned around to put my car in drive….. I saw it, “0 miles to E”.  I don’t know how many minutes/seconds it took for the light to turn green but it felt like an eternity.  I was able to get into a gas station and get gas.

Seriously, I wish my gas reminder would go off every 10seconds until I filled up my tank.  I am going to ask Ford for this upgrade in my next car!!

Growing Up Tater
Blog at WordPress.com.